October represents my seventh month of receiving dividends. It’s been a slow journey but I see things are beginning to take off. I purchased shares in one company, Whitecap Resources, for the month of October. I’m hoping to start picking things up a little bit in the month of November before the end of the year. I’m excited to reach a monthly average of $100 in passive income.

October was a great month of dividends for me, though that $100 in dividends appears to still be beyond my grasp. 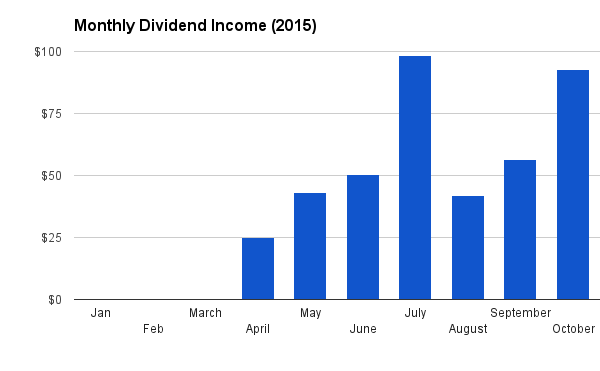 From my previous dividend income post for June, I announced that my monthly necessities add up to $290. Considering I received $92.76  in dividends this month, that means my passive income had paid off 31.99% of my necessities. Nearly a third of my necessities were paid for by dividends this past month. That’s quite stellar but there is a lot of spending on discretionary which I would like to focus on cutting back on. Perhaps budgeting will be a bigger part of my life in 2016.

In total yearly dividend income for 2015, I’ve now totaled $408.07 in dividend income. I can now say I’ve made over $400 in passive income! I’m sure there are billions of people who’ve never even tried. I’m set to achieve my goal of $500 before the end of the year in passive income. That is – while I sit on the couch, eat some fish, or play video games – I’m still being paid. Two months left to muster another $90 or so in dividends. 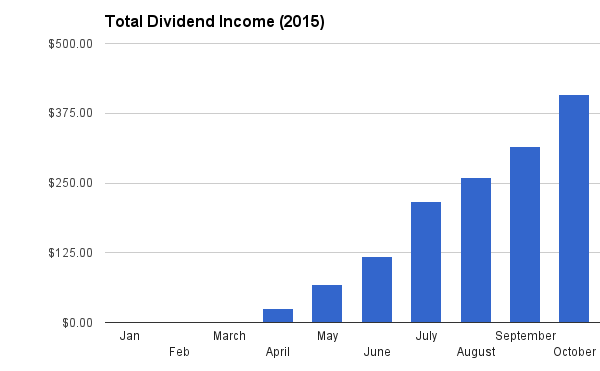