As some of you may know, from when I briefly introduced myself in one of my first posts, I’m a programmed by trade. Since I was 10 or so I knew that I wanted to program video games when I grew up. It all seemed like a distant dream back then, but dedication and hard work make everything and anything possible.

I programmed small desktop applications for fun, little games and editing tools when I was in high school. When I turned around 15, I started to code for a web-based browser game as a volunteer for experience and because I enjoyed it. I always saw programming as this tool; some knowledge you possess, which you can utilize to make something out of nothing. You tell the computer (CPU) what to do, and it obeys. Of course, it likes to spit out a load of gibberish frequently and make you want to pull your hair out before it settles down and does exactly as you’ve intended for it to do.

From my experience in that web browser game, I’ve come a very long way. After going through cegep (college equivalent in Quebec), I landed a position as a web applications programmer and I’ve loved it. Going to work everyday and doing what I want to do: programming, is one of the best things I could ever ask for. It sure beat my old job making sandwiches, at least.

I haven’t given up on programming video games, but it’s hard to find the time to be coding games. I do plan to jump into it pretty soon though, once I have a better grasp on my time. I’m always learning new technologies, and I’ll probably dabble in Unity to make a mobile game in a couple months.

Anyways…. I digress, this isn’t a programming / technology blog, and it’s time to unveil the application I developed.

After all the talk of video games you’d probably think it’s something at least closely related, well… you couldn’t be more far off. It’s a pretty simple utility program, but I take pride in having developed, published and released it on the store. Just so you all know, it is FREE to download and use.

The application I developed is called Whereabout, and you can download it for free right here. I developed this as much as just to learn about programming using the Android SDK in Java, to testing my capabilities. While it isn’t anything fancy, I dedicated the better part of a month to creating, tweaking and finalizing it. Any revenue I’d earn from it would be through AdMob (the Google AdSense of Android applications), and a potential Pro version I plan to release in the near future if any interest is displayed – but I’ll probably do it either way, just to say I did. I don’t expect much of a revenue stream from this, but it definitely opens doors to future development as I now know what the process is and can spin off a couple more rapidly in the future.

Whereabout is described as “the quickest and easiest way to send your location to your friends and family”. You can send your exact location, provided by your device’s GPS, to anyone in your contact list, or any one on your social media platforms – whatever you’d like to do, you can. Your location will send as a text message, facebook message, twitter post, etc. 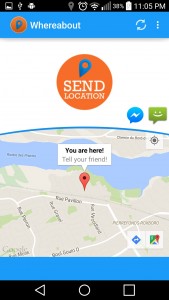 When the recipient clicks on the message you sent them, the location you sent will open up in their Google Maps application, and automatically set up a direct route to them. So, as soon as you click on the location your friend sent you – you’re set on your way to get to them.

We like to advertise the fact that you are sending your location; a route to exactly where you are; in only two taps of your finger. That’s literally convenience at your fingertips!

If a pro version were to be released, there are already a couple things that could be included, and have already been coded but not packaged up correctly into the application for public use yet. One neat thing is the user can send their Street View location in addition to their route; this means when you send your location, the recipient clicking on it will also see the street or building from where you’re sending it!

While I won’t be disappointed with whatever results this project may yield, it was a great learning experience and got my feet wet in the mobile application scene. I’m sure it will propel me into other projects once I have a couple more designs. There are a few from which I can choose now, but I’m going to take a bit of a break, and I’ve been taking blogging more seriously recently; it’s really quite enjoyable.

Hopefully I muster up the drive to release the pro version soon, and will have a write-up if it is released. Until then, I’ll continue with the blog side hustle and any other forms of passive or semi passive income I can discover and muster! There ain’t nothing better than getting paid after the fact, while you sleep, eat, or read a book.

15 Replies to “Side Hustle: Released My First Mobile Application”