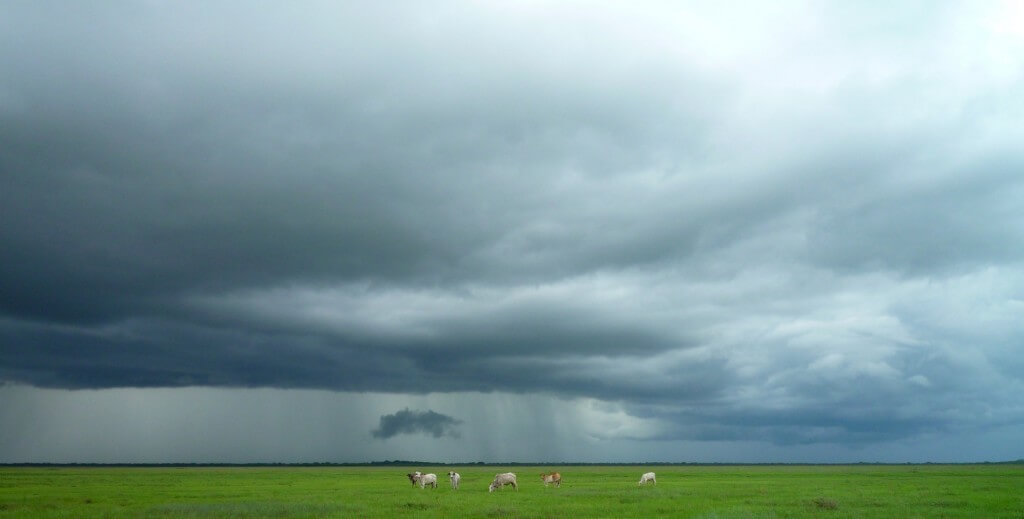 While reading the Monetary Policy Report for January 2016 by the Bank of Canada, I figured that there was definitely some information on the pages which could help the average retail investor and better position them for decision making going into 2016. This is part 2 of this mini-series; this part focuses specifically on the Canadian Economy.

Part 1 of the Monetary Policy Report excerpts were focused on the Global Economy.

After my highlighted excerpts,  I will add my own little take on some of the information and briefly mention which stocks are of interest concerning the information consumed.

The following are excerpts taken directly from the Monetary Policy Report for January 2016 by the Bank of Canada.

All credit for every following excerpt goes to the Governing Council of the Bank of Canada: Stephen S. Poloz, Carolyn Wilkins, Timothy Lane, Agathe Cote, Lawrence Schembri and Lynn Patterson.

Canadian Economy Excerpts from the Bank of Canada

The commodity-producing sector has shrunk rapidly, significantly reducing investment and employment, and the effects of this process on the level of GDP are expected to peak roughly in mid-2016.(12)

The timing of the reallocation to the non-resource sector is also more uncertain than that associated with the resource sector. in particular, this adjustment process is expected to be protracted, extending well beyond the projection horizon. (12) 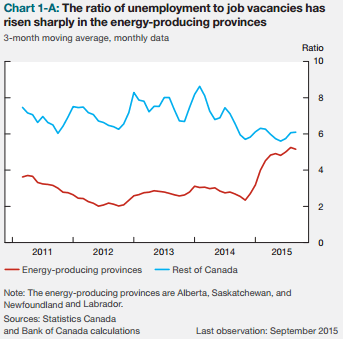 Inflation has been below 2 per cent, as expected

The effects of exchange rate pass-through are particularly pronounced in the prices of fruits and vegetables, as well as in those of core goods such as appliances, clothing, reading material and some other food products. (15)

Given the persistence slack in the economy, measures of core inflation would be lower without the impact of the exchange rate pass-through. Pass-through is estimated to have boosted CPIX inflation by about 0.5 to 0.7 percentage points in the fourth quarter of 2015. (15) 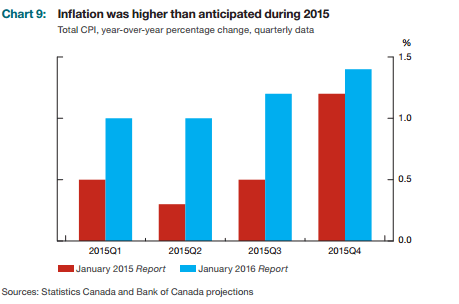 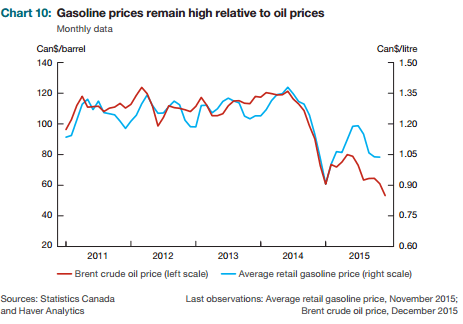 After rebounding in the third quarter, real GDP growth likely stalled in the fourth quarter… 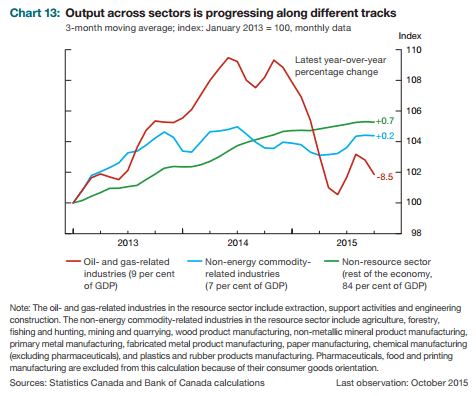 …and the degree of slack in the economy has been increasing

Net job gains over the past year were concentrated in full-time positions, many of these were in the category of self-empowerment, which is historically associated with weak economic activity. (18) 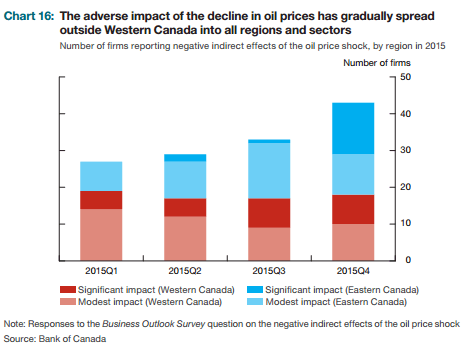 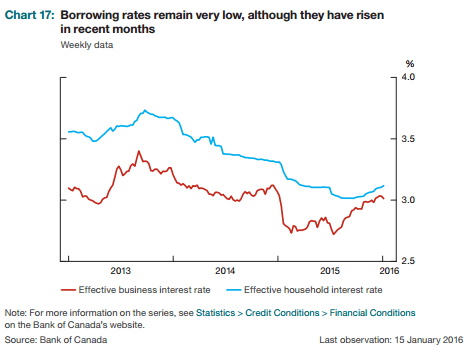 Lower commodity prices are depressing activity in the resource sector

Weaker profitability and sharply lower capital expenditures in the oil and gas sector will further reduce production and exports of energy over the medium term. (20)

Currently assumed prices for oil are approaching break-even prices on a cash flow (i.e., average variable cost) basis for many producers. As a result, there are greater downside than upside risks to production and investment stemming from oil price movements. (21)

Medium-term price expectations remain positive, largely because of the view that deep cuts in capital expenditure globally are setting the stage for tighter supply in the future and therefore an eventual recovery in prices. (21)

Further cost reductions are becoming more difficult to achieve, however. Many firms indicate that neither they nor their suppliers are able to generate additional substantial cost savings or productivity increases in the short-term. (21) 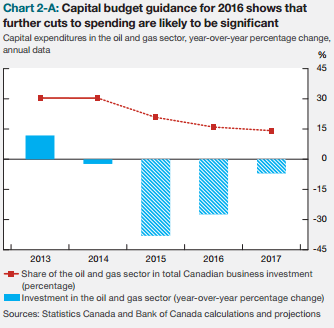 Unlike conventional oil producers, oil sands producers find it difficult and expensive to scale back production, causing some to operate temporarily at a loss. With low oil prices persisting, firms anticipate more painful wage and staff cuts ahead. (21)

Struggling companies that are unable to remain competitive will restructure or exit the industry, while healthier companies will look for opportunities to purchase distressed assets and improve scale efficiencies. (21)

Non-commodity exports will also be supported by continued growth in foreign demand. (22)

Growth in non-commodity goods exports has been led by components that are sensitive to movements in the Canadian dollar, roughly two-thirds of which are showing positive momentum and are outperforming those that are less exchange rate sensitive. […] Many subcategories of non-energy-commodity and non-commodity goods exports – such as potash, seafood products, and ships, locomotives and rapid transit equipment – showed sizable gains during 2015 (Chart 18 and 19).

In the services sector, travel services have benefited from the lower Canadian dollar and the resulting change in travel patterns. The number of international visitors to Canada has picked up, while the number of Canadians going abroad has declined (Chart 20). (22) 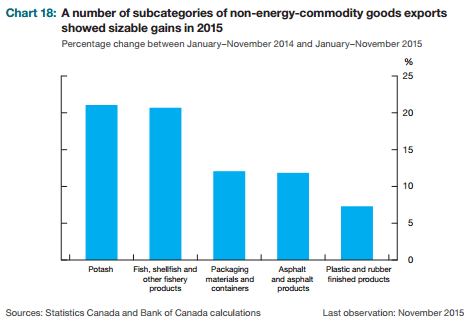 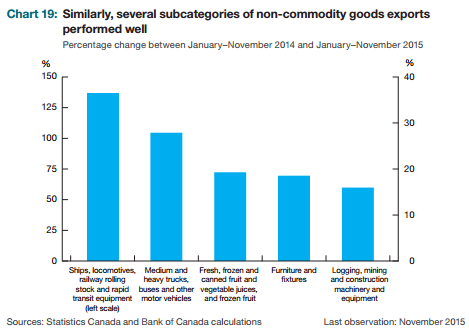 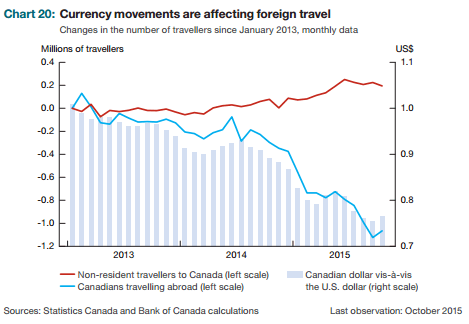 Firms engaged in non-commodity exports are more optimistic about growth in their sales prospects over the coming year than firms that are more oriented towards domestic sales. (23)

Business investment is expected to expand starting in the second half of this year as the drag from reductions in spending in the oil and gas sector dissipates. (24)

Tourism-related activity has increased and further gains are expected. (24)

The overall ratio of debt to disposable income will likely edge higher in the near term. (25)

Quick Thoughts From The Dividend Beginner

One interesting thing I note here is seeing “Chart 18: A number of subcategories of non-energy-commodity goods exports showed sizable gains in 2015”, where, much to my surprise it shows that Potash prices have increased roughly 20% from January – November 2015 as opposed to January – November 2014, when, in fact, Potash prices have been falling and is the reason that Potash Corp. has been having so much trouble and recently had to cut their dividend. The thing about this is that potash prices have been increased in Canadian dollar terms, but falling in U.S. dollar terms. While this makes sense, it took me a moment to register as I saw the chart and believed it made no sense. You can see the Potash price chart in US dollars vs the Potash price chart in CAD dollars for yourself. The falling price of potash is one of the few reasons why I have not invested in Agrium (AGU). I find this a safer alternative to Potash Corp. of Saskatchewan (POT), however POT should be in better shape than before after the dividend cut. Regardless, I don’t like companies which ever cut their dividends. I also like AGU’s diversity in their income streams. As I have the desire to hold less and less commodity-influenced stocks, it may be a while before I invest in potash.

From “Chart 19: Similarly, several subcategories of non-commodity goods exports performed well”, the stocks that come to mind immediately as I see the top two largest gains in order are: Canadian National Railway (CNR) and Magna International (MG). I’ve gone over my thoughts for Magna International in my first look at the Bank of Canada’s Monetary Policy Report, while MG isn’t really a transport stock I included it here due to it’s appearance in Chart 19. Canadian National Railway has now showed up in my two monthly Stock Watch Lists twice in a row, for January and February 2016 – proving that it’s a high-quality asset at a decent price. Unfortunately the yield is very low compared to other options for February, but the dividend growth on CNR is very high and is a great reason for the stock price to increase over time. In fact, CNR recently increased their dividend 20%. These are both high-quality assets.

With the Canadian dollar battered down so low, there has been a surge in tourism in Canada. From Chart 20, since the beginning of 2015 we can deduce that non-resident travelers to Canada has been increasing steadily, while Canadians traveling abroad has been shot down big-time. The only stock which comes to mind for this situation and which follows the DGI methodology is WestJet Airlines (WJA). However, according to their most recent results released, their Western Canada exposure has caused a large drop in their earnings. Considering I’ve looked extremely little into travel stocks, I am not in a position to write much about this sector as I have yet to find a compelling reason to invest in it. So, I will leave you with this information concerning WJA for futher learning. WJA also has a decent 3%+ dividend yield and a PE below 6. It’s something to look into further, which was the point of this post!

That’s a wrap guys! I really hope this overview helped, even just a bit. Reading through these excerpts opened up my eyes a bit and got me looking in a couple new directions, which is exciting. I didn’t go in depth on any specific stock but brought up a couple, so check them out if you have an interest. Be sure to perform your own due dilligence!